Bass legend Tony Levin performed with King Crimson for more than 40 years and took countless photographs on and off stage. He spent the last few years selecting his eight favorites, and is now releasing them as a high end commemorative set of archived quality handmade prints. They’re being produced by printmaker and publisher Jon Lybrook of Intaglio Editions located near Boulder, Colorado. And for the past several months, I’ve been working with Jon and Tony on getting the word out about this special collection. The eight selected prints are:  King Crimson Asbury Park 1982, Bill Bruford, Bristol 1981, Adrian Belew, Backstage 1981, King Crimson, Faro, Portugal 1982, Robert Fripp, Krakow, 2019, King Crimson at the Royal Albert Hall, 2019 Perkins Palace, marquis 1981, and on the Shinkansen 1981. I interviewed Tony in November 2021, about his history with photography and his work with King Crimson. Check that video out if you haven’t seen it because he gives a great background on this print collection. And on his own photographic approaches, which involve foot pedals, squeeze boxes, his early foray into digital photography and more.

The King Crimson photogravure prints are beautiful. And I’ve actually had various proofs of them here in my studio for several months. Jon Lybrook sent them to me in these big black ribbon tied portfolios. But I recently received the special edition print collection box with all eight prints, white gloves and the works. It is absolutely gorgeous and one of the nicest material objects I’ve ever had in my own home. Now, I’m not much of an art collector, but I can tell that people who really care about owning art and archival photographs are going to love this set. I originally got involved with Jon because, Paul Richards from the California Guitar Trio had a couple of collections of his own photographic prints by Intaglio Editions, and they’re wonderful. Most interesting is his broad chalk collection of prints from his time living with Robert Fripp, in the 16th century reddish house in England. There’s a whole Wikipedia page about that house if you want to read about it, and maybe someday I’ll release the footage of Paul talking through his photos.

So once I saw Paul’s prints, I wanted to learn more about the guy making them and how his crazy brain works. It turns out that Jon Lybrook is a big music fan, especially of King Crimson, and he makes prints for several artists, including Jerry LoFaro, who painted the modernized Tarkus cover of the Keith Emerson tribute concert DVD. Pretty cool.

I spent a day in the summer of 2021 with Jon in his studio learning about the entire printmaking process, and it’s pretty astounding. Intaglio printmaking is a very time consuming work of manual labor and is almost entirely analog. He starts out with a digital photo and does all his mixing and mastering and then etches the image onto a steel backed photopolymer plate. It’s a photographic process with an insanely bright light bulb and some complex computations and Old World machinery to get the tones just right. And once the plate is ready, the manual labor begins. Jon takes an inked up roller and smothers the plate to prepare it for the print. He then wipes the plate smooth with cheesecloth, so the ink sticks to the dark parts of the image. He then takes a large sheet of paper which has been soaking in water for an hour. He blocks it so it’s just the right dampness and runs it through his printing press a bunch of times to flatten it perfectly smooth. Then finally he takes the inked up printing plate on the press bed where it’s now ready to be printed. And what I’ve just summarized in a few sentences takes at least 20 to 30 minutes of work to prepare.

Once the paper is placed carefully on the plate. Wool blankets are put on top of the paper and the plate and then turning what looks like this giant captain’s wheel from a large boat. The entire press bed glides under the big metal cylinder applying thousands of pounds of pressure on the paper and the plate. And this process transfers the image onto the paper. And voila, there is a beautiful archival print at the end made only of low-acid, traditional etching paper and oil-based ink. Now each of Tony Levin’s eight prints will be made 500 times which will take Jon several months to complete. Each comes numbered hand titled and individually signed by Tony along with a signed and numbered certificate of authenticity, which is also signed and stamped by Tony and printmaker Jon as I mentioned, I’ve seen these prints in various states from pre-production to final editions. And these final editions are gorgeous. They’re 500 bucks a piece, or you can buy the whole set of eight with the collector’s box for 3700 bucks. When I started this project with Jon and Tony, I knew next to nothing about the printing process. But now I can say I’ve seen the work from start to finish, including the final product. And it’s seriously impressive. If you’re a fan of King Crimson, and you want some really nice collectibles on your wall. This is the set you need. So check it out at tonylevinprints.com.

Now let’s take a look inside the box. Maybe that’s what you’re waiting for. So I’m just going to open it up carefully, because this box is like it’s really beautiful. And I just, it’s not mine. I don’t want to do something to it. So it’s pretty heavy. Actually, before I open it, let me tell you picking this thing up, I’m going to guess it’s five to seven pounds. You can see it’s pretty thick. I mean, it’s got to be. Yeah, like I said five to seven pounds. And it opens really beautifully. It’s really a solid construction, I’m going to guess this is wood. And there’s wood lining the whole thing, including this back panel and the top. And then it folds open like this, but I don’t want it to fold all the way back and crease. So you can see the white gloves here that come with the box. I’m just going to close this before I do something stupid. So the gloves are, you know these nice fabric gloves. And then inside this folder here, is a letter from Jon about the prints and the collection. And then here are the certificates of authenticity. So you can see here. I think you can this is the certificate on the lower left is a signature from Tony, on the lower right is Jon’s signature with the stamp. It’s like an embossed stamp.

I’m not going to take all eight out there pretty heavy stock paper pretty thick, which is great. Then let’s take a look at the prints themselves, which you’ve already seen in this video. But I’ll just show you live. Now this one is my favorite. This is the Royal Albert Hall print. I love this one because it’s. I love the aspect ratio. I know that sounds funny or silly or trivial. But just like with Frank Lloyd Wright architecture, you know, he uses just certain dimensions. And I just love the aspect ratio on this image. I love how the light is cast on the whole crowd and the venue. I don’t know how Tony did this, but the light in the center of the crowd. And the whole band is right up front. It just feels like you’re part of a scene. Like a lot of the other prints are, they’re great. And you do feel like you’re there in a one on one scenario. But I feel like this print in particular, is just immersive. It’s like you are at the venue you’re on the stage, you see everything that’s going on. And anyone who knows King Crimson knows that. If there’s a photograph being taken by the band, it’s at the end of the show. And you can see Robert holding his camera out taking a photo. So this is Tony taking a photo of the whole band. Although Tony’s not in this one. He is in other photos. But yeah.

I love this print. And then inside the box, all of the prints just have wax paper between them. So there’s the print, there’s a sheet of wax paper behind it. And then there’s the next print. I don’t want to screw anything up here. So I’m just going to close the box. Just so precious, I just and they’re not mine, so I want to take good care of them. Anyway, so that’s the box. That’s the collection. It’s gorgeous. I think of it is like 3700 bucks is like a really high end instrument. And this is like a really high end set of pieces of art and you get eight of them. So I think it’s well worth the price. But yeah, check them out at tonylevinprints.com. And if you pick one up, let us know leave a comment and let us know what you think of it. Cool. Hope you enjoy it! 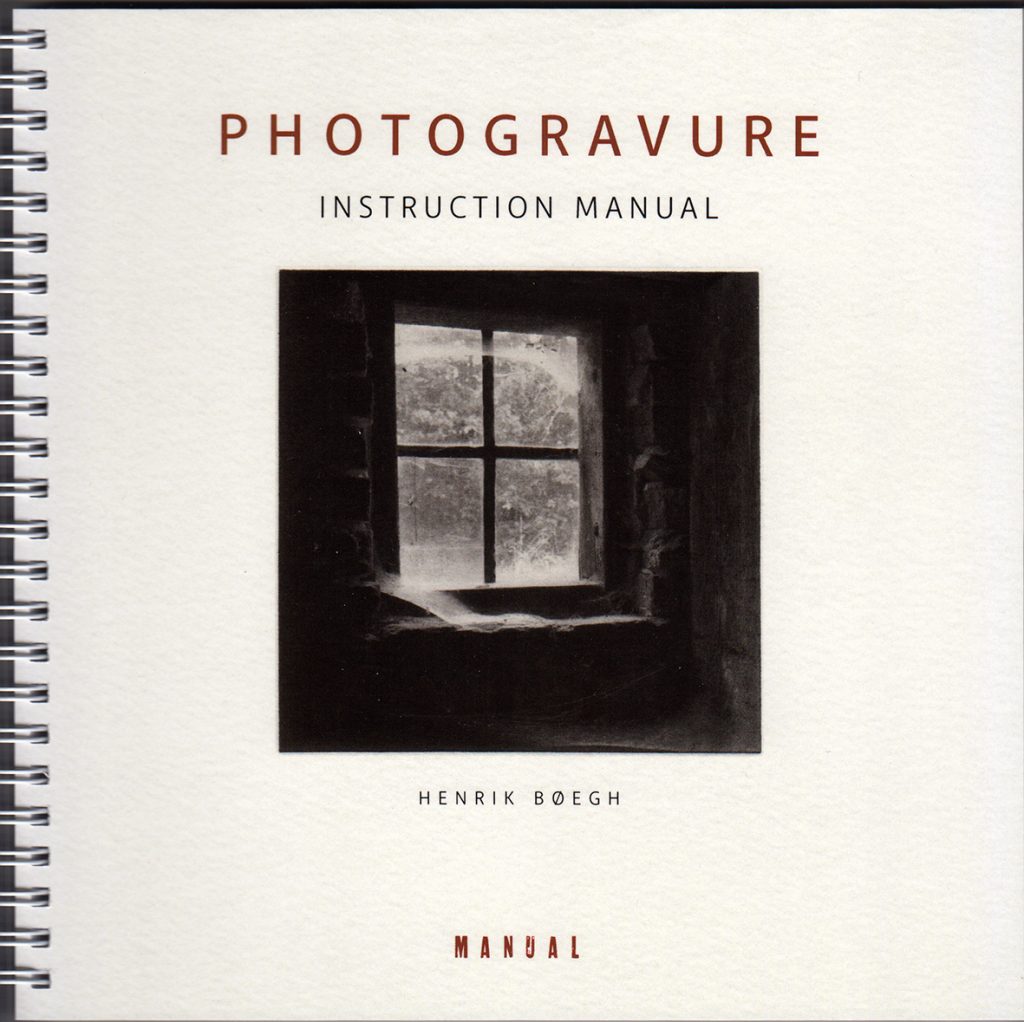 Artist Henrik Boegh of Denmark, author of  Handbook of Non-toxic Intaglio: Acrylic Resists, Photopolymer Film & Solar Plates Etching has just released a must-have handbook that covers many of the basics of his first book for creating supurb plates and prints using the classic Double-exposure method and an aquatint screen. This book is for beginners and slightly more advanced for students with an interest in more advanced Duotone techniques, as well as Direct-to-Plate, or DTP.

Henrik is a veteran author and University professor who has taught printmaking for decades after leaving his post as Chair of the Economomics department at a prestigious university in Copenhagen to pursue his craft of printmaking.

This book cuts to the chase and provides essential guidance for the begining student and excellent set of guidelines and new approaches that may surprise even the most photographically critical printmakers. 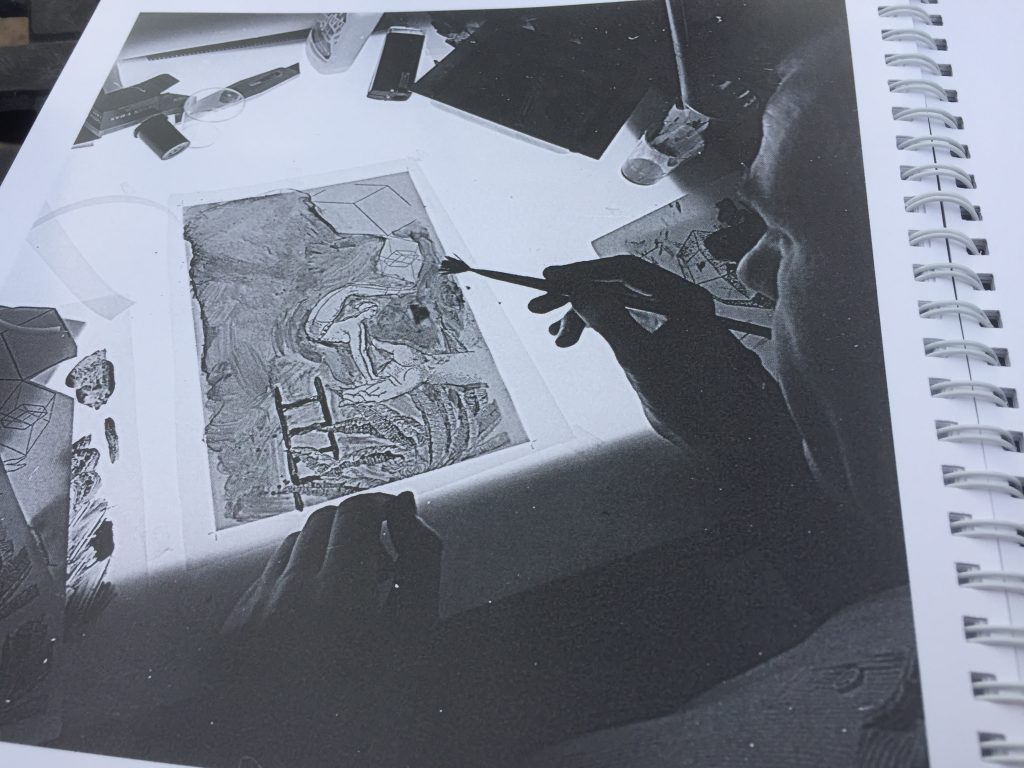 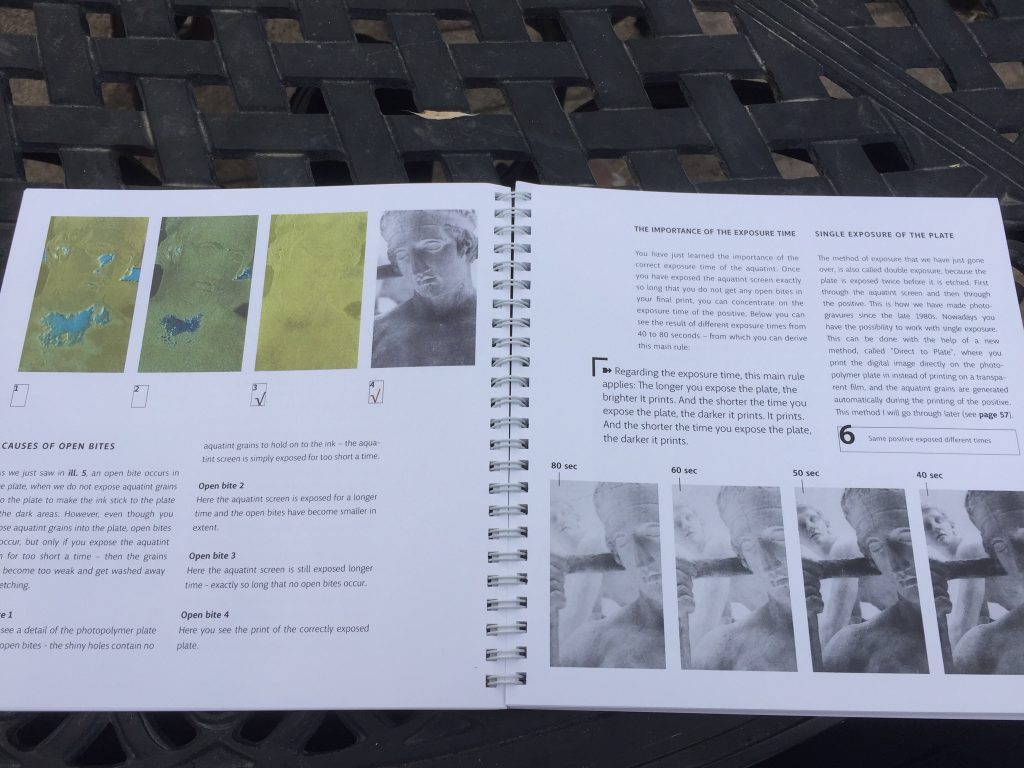 Superb troubleshooting tips throughout the book keep the student informed of all the common pitfalls of his process and provides inventive approaches to creative mark-making not previoulsy published by this veteran author and artist.